Lisa & I got married on May 19, 2012. For our first anniversary, Lisa bought me a trip to Jamaica (pretty awesome, eh?!)! We’ve always talked about traveling to Jamaica (the land of Red Stripe beer) but never got the chance to go so we were very excited to say the least!

We left Edmonton during the first week of September, which may seem like a strange time to go on vacation, but it worked perfect for us considering how busy we’ve been this summer. We stayed at the luxurious Grand Bahia Principe 5-Star all-inclusive resort in Runaway Bay. The Resort was beautiful & the beach was the nicest I’ve ever seen! In addition to the ginormous pools, beautiful beach, & delicious restaurants, there was a massive marketplace that included a karaoke bar (which I visited several times), a disco, a sports bar, a small restaurant, & many shops. All of these buildings surrounded a huge open area where crowds gathered at night to watch the nightly entertainment. I’ve been to several resorts around the world & this was definitely the largest one I’ve stayed at.

We had a hard time choosing which of the many tours we wanted to go on during our week stay in Jamaica. We eventually decided on two tours & one trip to town. The first tour we went on was the Blue Mountain Bicycle Tour. Being a huge coffee fan, we wanted to check out first-hand where the infamous Blue Mountain Jamaican Coffee came from. In addition to seeing where the coffee was grown, we got to ride cruiser bicycles down the Blue Mountain which is the highest peak in Jamaica! Even if we were forced to hold our brakes during the entire two hour bicycle ride due to the incline, we had a blast cruising down the mountain, through the clouds, & into the rain – Lisa didn’t want to get wet from the rain so wore a stylish rain poncho. Biking was the best way to view Jamaica’s mountain side! At the end of the bicycle tour, we were served a hot lunch (too bad I couldn’t eat much as I forgot my insulin at the resort!) & enjoyed Jamaica’s famous jerk chicken. We then stopped at a waterfall to take a dip in the water & watch some pro divers dive into the water. Here, I partook in a Red Stripe beer drinking competition. Red Stripe is one of my favorite beers out there so I had no problem with the challenge. Unfortunately, I came in second place but in my mind I won because I got a free beer! Other than the 4.5 hour bus ride to get to Blue Mountain from our resort, we loved this 12 hour tour! I snapped the photo below which was approximately a quarter of the way down the mountain (just below the clouds). We were told by the guide that men flee to these houses on weekends to spend time with women other than their own wives. 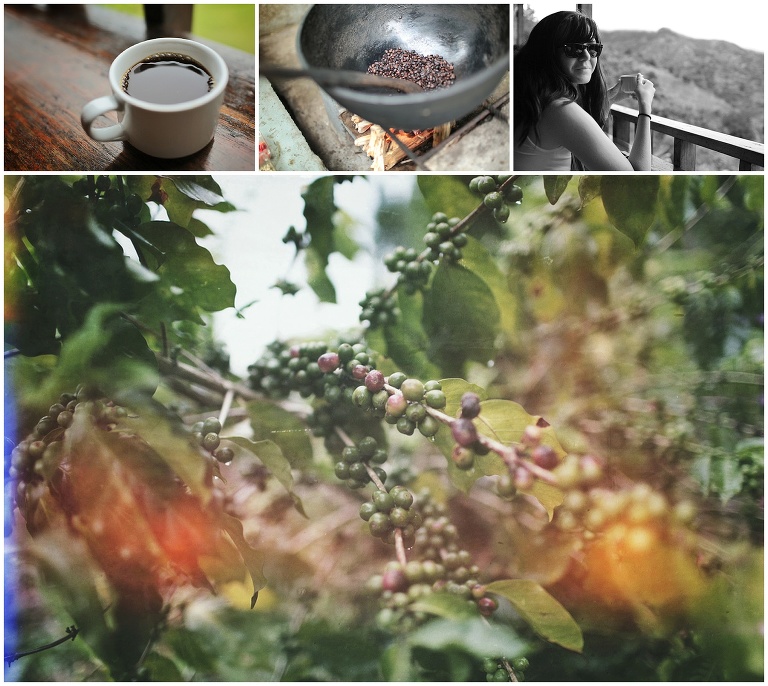 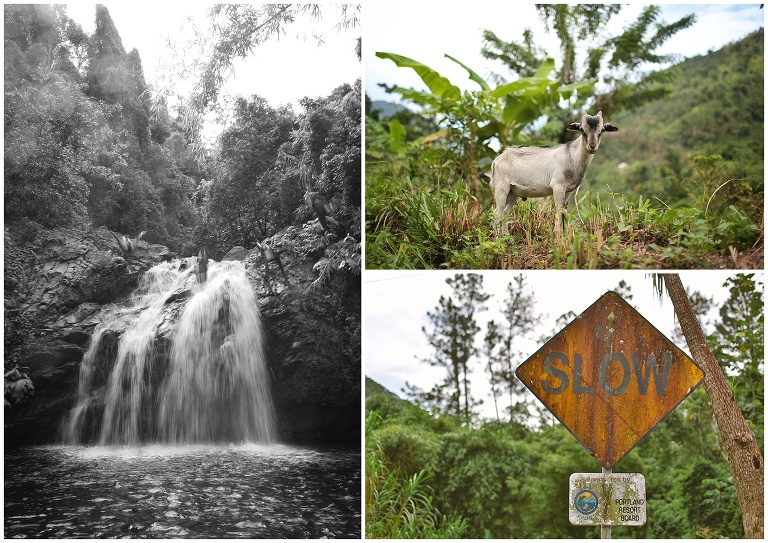 The second tour we took was my favorite – the Nine Mile Bob Marley tour! We traveled to Nine Mile which is the birthplace of the legendary Bob Marley. As soon as we got off the bus, we were able to ‘legally’ purchase marijuana-themed paraphernalia from a man in a window behind a solid concrete wall that surrounded the facility. Let’s just say I love Jamaican brownies! So as we’re touring Bob Marley’s birthplace, enjoying live reggae music & drinking Red Stripe, everyone (well most people) in the group are either smoking the ganja or nibbling their brownies. Whether or not you were the one smoking or eating the home-grown weed, everyone in the group had no choice but to ingest the bellowing smoke that filled the tour. After touring Bob Marley’s house & his grave, people really started to feel the effects of the ganja. In fact, a young woman (who apparently was on her honeymoon) passed out on me after smoking too much! Later on the bus ride home, a young fellow forced the bus driver to pull over & expel his previous meal…another case of taking too much! It was a quiet bus ride back to our resort as everyone was ‘chilling out’ from the after-effects of the green. In fact, there was even one couple who was so relaxed that they missed their bus stop! All in all, this was an awesome tour & an experience that I will never forget. I recommend the Nine Mile tour to everyone who travels to Jamaica (unless of course you’re pregnant…then you definitely should NOT take part in this experience).

Can you spot the man trying to sell a joint through the crack in the wall (photo below)? 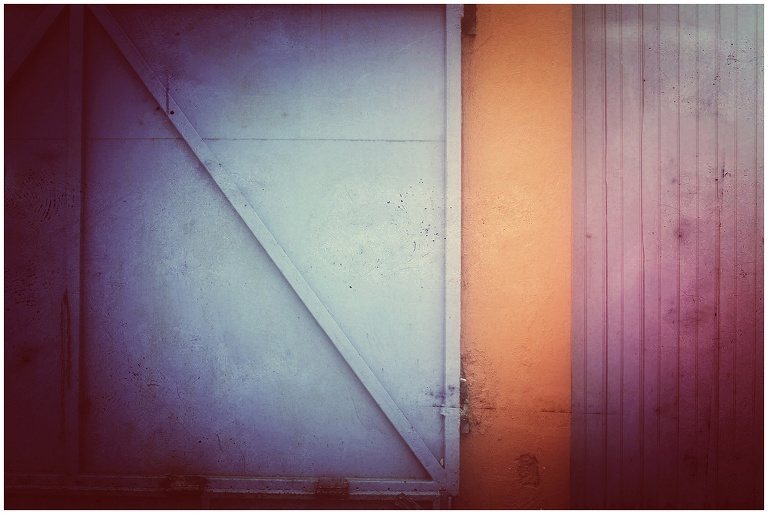 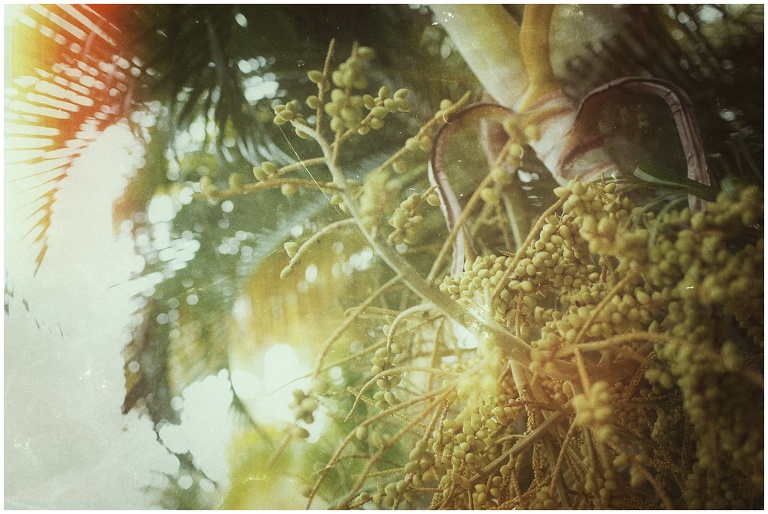 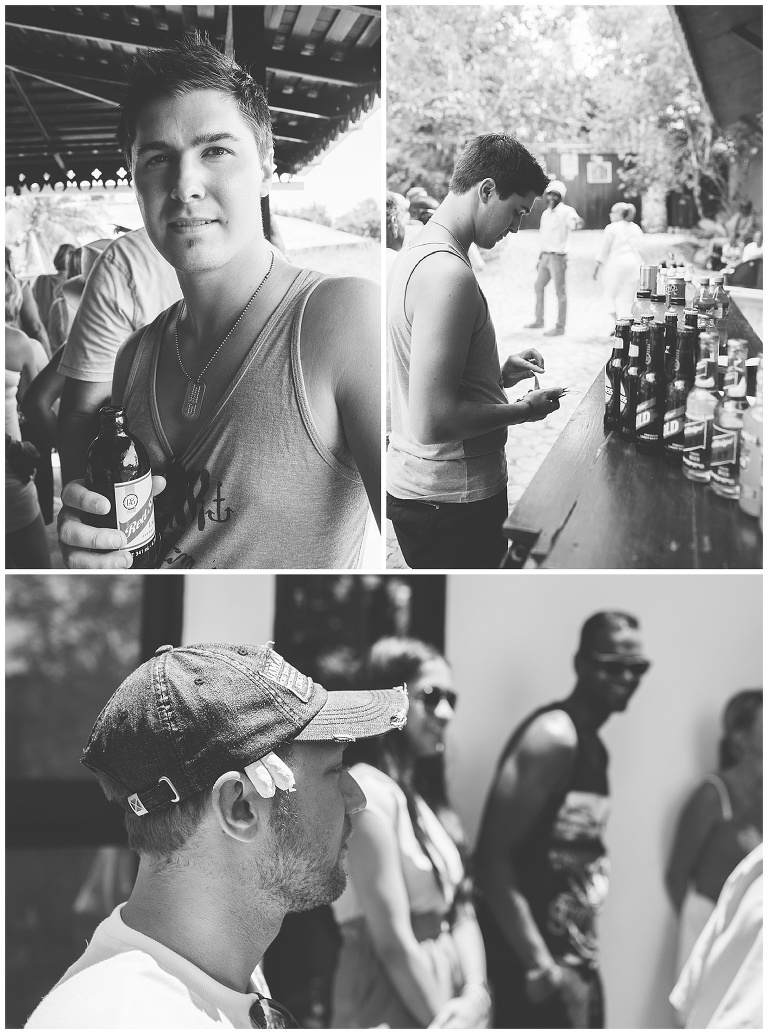 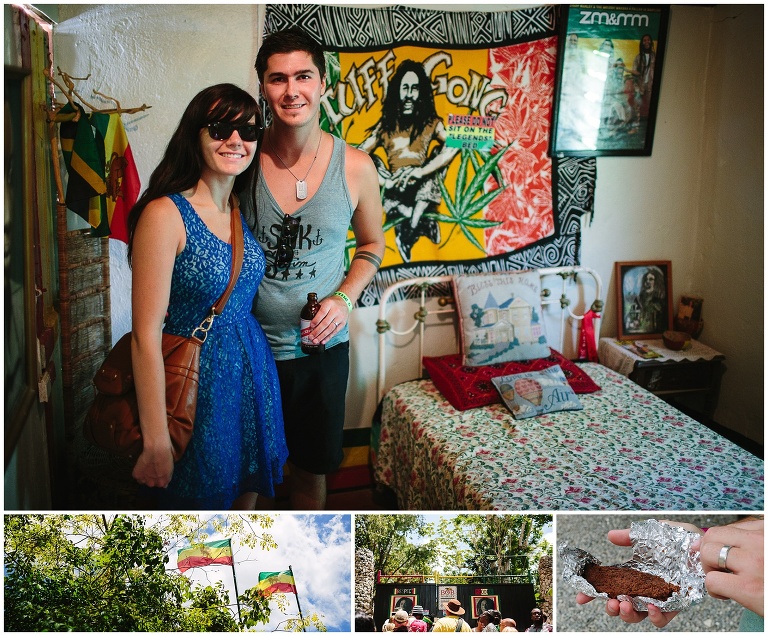 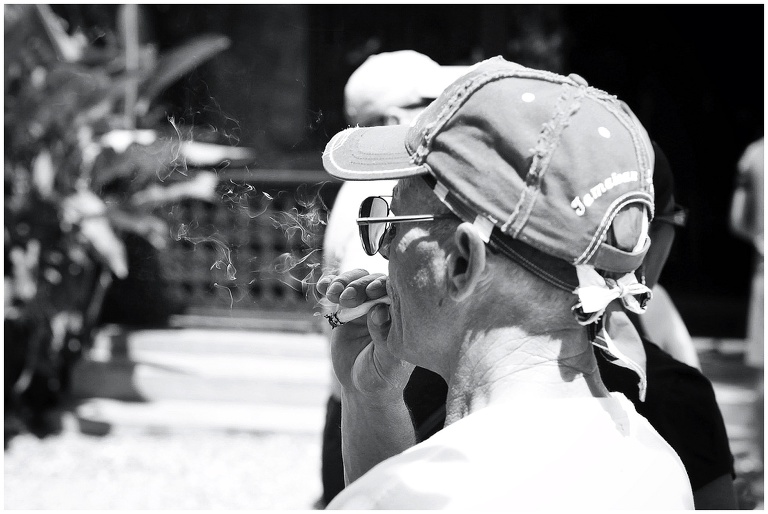 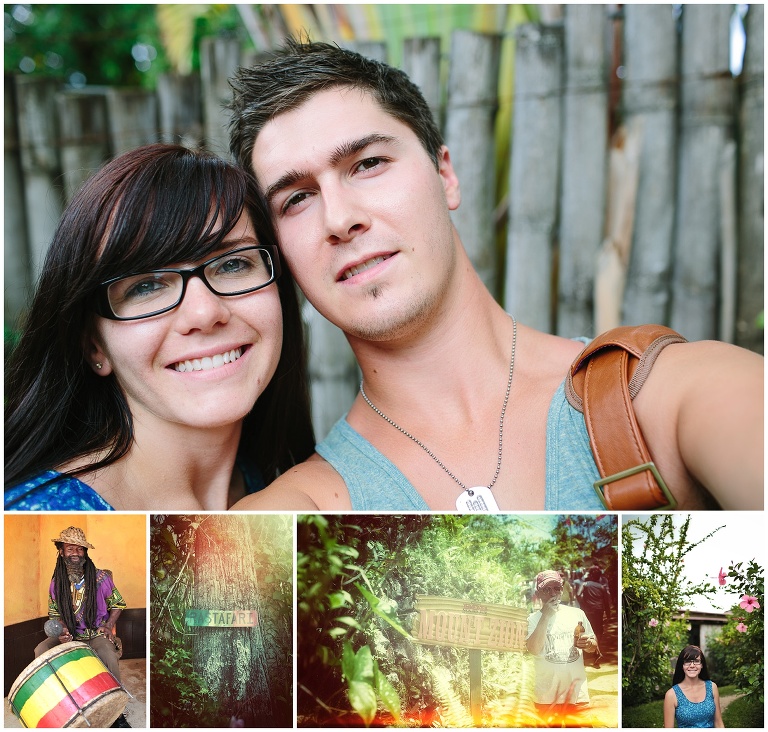 In addition to the two tours that we went on, Lisa & I wanted to visit a town to get a first-hand experience of Jamaica aside from the tourist traps. We’ve walked the streets & checked out Mexican flea markets several times before so we knew more-or-less what to expect…or so we thought! As soon as we got off the bus in downtown Ocho Rios, we were instantly being hassled by the locals to ‘check out their shop’ in the market. We were planning on checking out the flea market anyway so we followed the sketchy-looking fellow with open arms. As we walked past all the other vendors in the market, we were being hassled to check out their shop. Of course the sketchy dude we were following led us to the furthest shop in the market which strictly contained drug paraphernalia. Unlike the markets in Mexico, we didn’t see one white tourist within the market. After finally taking a look at the man’s merchandise & politely refusing his requests to purchase his goods, I was trying to make our way out of the market & back to the street. Lisa was getting freaked out & I was starting to get irritated by all the vendors who insisted we visited ‘their’ shop. I pretty much grabbed Lisa’s hand, closed my eyes & hurried past all the other vendors out of the market back to the street. We had two more hours to explore Ocho Rios before our bus came back to pick us up (initially we thought two hours wasn’t going to be enough time…boy were we wrong!). We were in Ocho Rios for ten minutes & we were already itching to leave! Lisa was terrified & I just wanted to grab a Red Stripe! We tried to cross the busy street to get away from the crude flea market but were unable to cross due to the intense traffic. Suddenly a Jamaican man said to follow him or ‘we would get killed in the traffic’. The man walked in front of the road with his hand out waving us over to follow him. We decided to follow the character to make our way across the street…bad idea! The man wouldn’t stop following us & kept trying to persuade us to follow him down an alley, promising an ‘irie restaurant’ at the destination. Lisa was skeptical but we decided to follow the man…I just really wanted a Red Stripe! Eventually we bailed & found a little pub that we hurried into, hoping the man would lose us. He waited outside for several minutes until we ordered some drinks…then he finally left…phew!!! I enjoyed my Red Stripe & Lisa sipped her iced tea as we were surrounded by local Jamaicans…no tourists in sight! Of course I brought my camera (which I guarded with my life), hoping to take some photos around town. We eventually found a quieter area where we spotted one of the couples we met on our bus…thank god! I snapped some photos of the area & met a kind 1-legged, red-eyed, Rastafarian fellow of few teeth who was strumming reggae songs on his guitar – I had to have a photo of him! I paid him $5 to snap some photos of him which totally made the trip to Ocho Rios worth it! Ocho Rios was an experience I will never forget but only recommend going there once in your life! 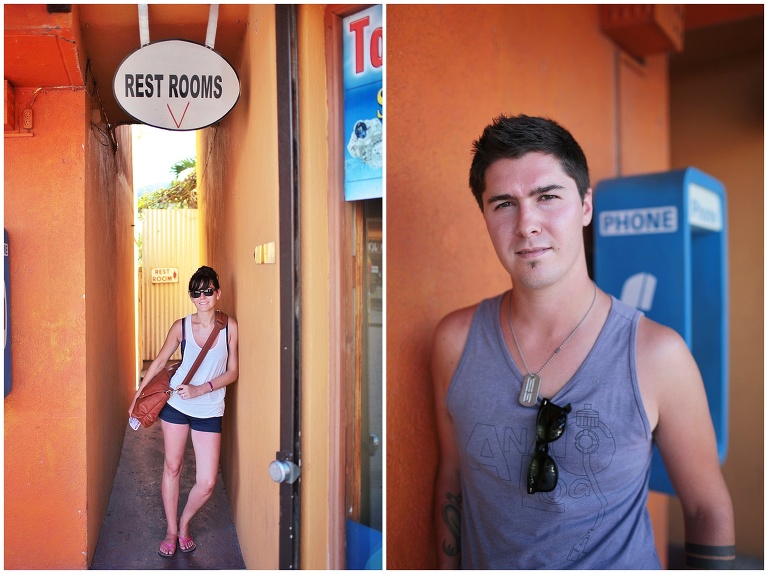 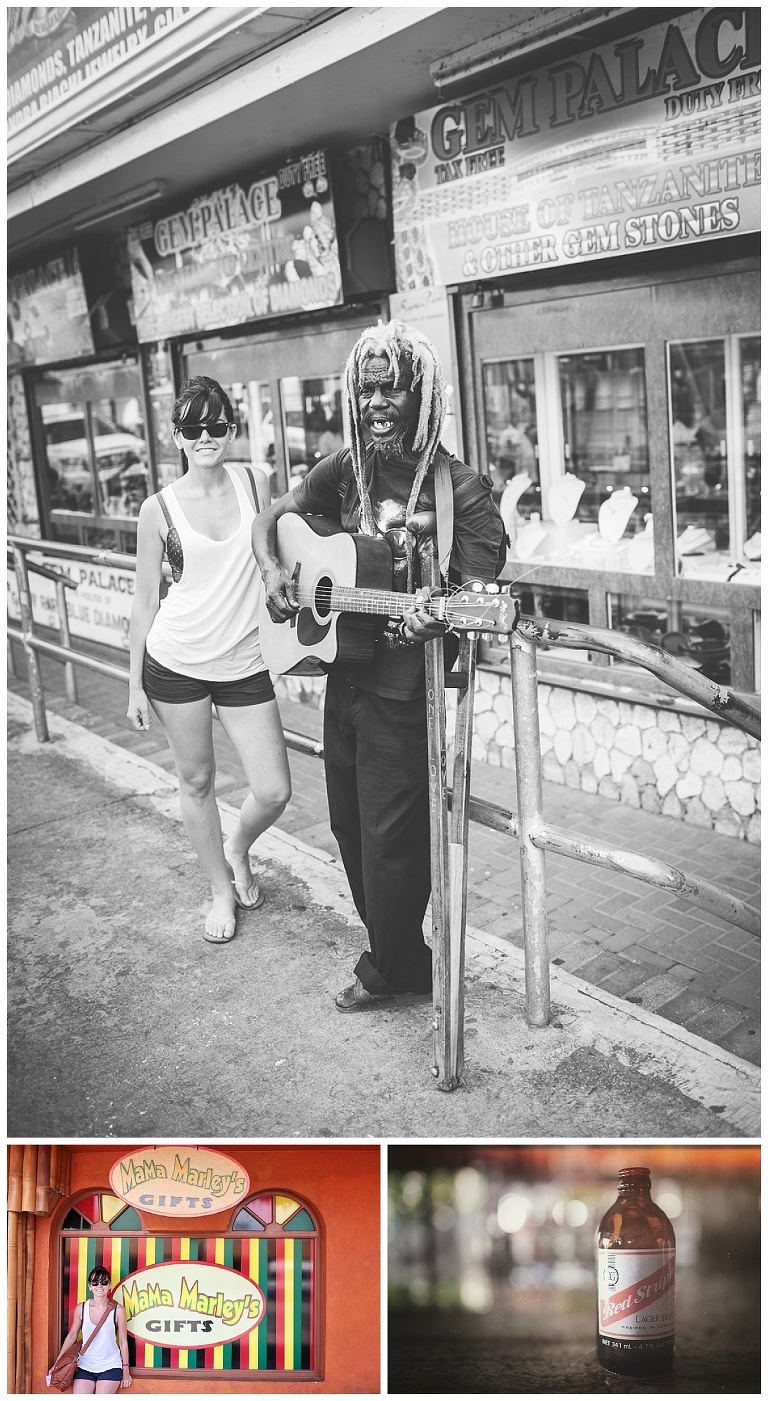 The Caribbean beaches are some of the nicest I have ever visited & the sea is as warm as the skin on a pot-bellied pig. These are just a few of the many photos I snapped while visiting Jamaica which I hope to visit again in the future. Where we going next anniversary, Lisa? 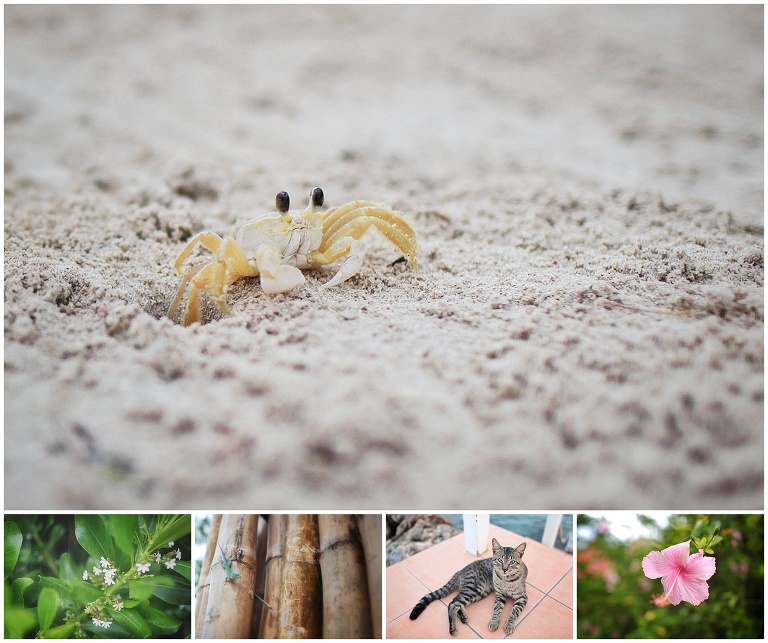 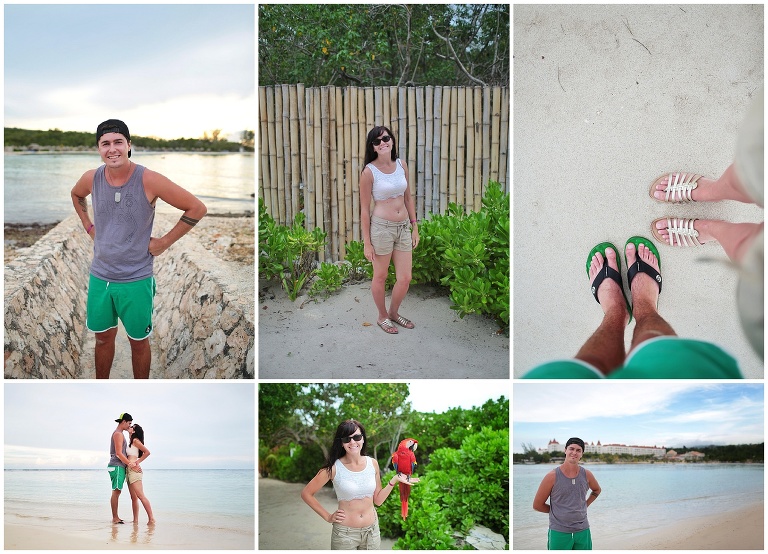 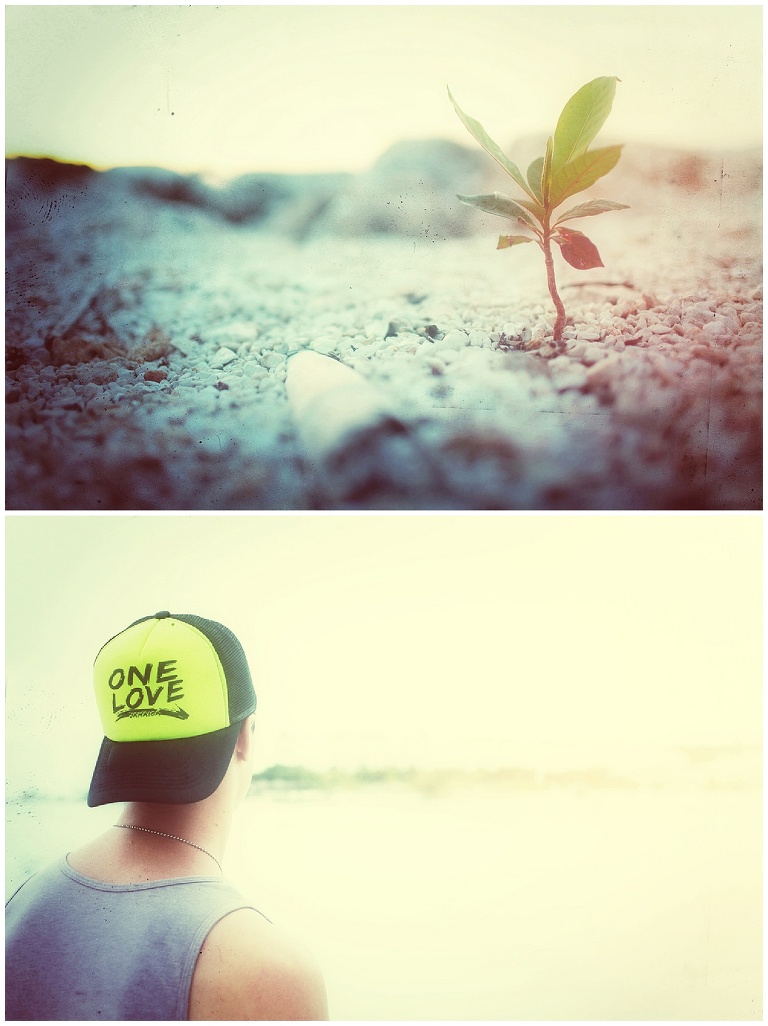